new Delhi: Wearing masks is one of the ways to avoid the corona virus. And the mask that is discussed the most is the N-95 mask. The World Health Organization has also said that N-95 masks are the safest way to avoid the corona virus. But now questions have arisen over the N-95 mask as the central government has warned all the states by writing that the pierced N-95 mask does not stop the spread of the virus and the use of this mask to prevent the corona epidemic. Is against The reason for this has also been given in the Central Government letter.

In fact, the N-95 mask has a special valve that protects up to 95 percent of the micro particles and fluids floating in the air from inside the face or nose.

But according to the Central Government Advisory, the N-95 masks with valves do not protect the wearers from micro particles or viruses floating in the air. So it is not right to wear such masks.

Also, if a corona patient wears an N-95 mask, droplets can come out and spread the corona virus through a valve when they cough or sneeze.

Government issued warning
This warning of the government has become very important in the growing Corona cases in the country. Because people are using N-95 masks extensively to avoid corona. Reports show that the market for N-95 masks has increased nearly 29 thousand times since January. Earlier, on an average 1 thousand 670 masks were sold daily. Now about 4 crore, N-95 masks are being sold every day.

Fake N-95 masks are also being sold in the market now, which can prove to be dangerous. In such a situation, you may be thinking which masks should be worn when N-95 masks are not safe. They also tell you.

Even after more than 6 months of corona virus, many people neither know the right way to apply mask nor have they understood which mask, where to apply it. Such people should see this report answering every question related to the mask.

Delhi moving towards Herd University?
Is Delhi fighting the corona virus moving towards Herd Immunity? This question is because the report of Serological Survey has come in Delhi. Which is also commonly known as sero survey in the colloquial language.

It has been found in this survey that about 23 percent of the population of Delhi has been affected by corona infection. Because anti-bodies have developed against this virus in every fourth person in Delhi. The survey also revealed that most of the infected persons were asymptomatic ie without symptoms.

This sero survey was conducted in all 11 districts of Delhi between June 27 and July 10, in which blood samples of 21 thousand 387 people were taken. With the help of this test, it was known that how many people have developed anti-bodies to fight the corona virus. Which shows whether the person was ever exposed to the corona virus or not.

One of the results of the sero survey also means that the expectation of Delhi to get herd immunity has increased.

Herd immunity, in medical science, is called the process when a large part of the population is infected with, or has been infected with the virus. So that they can become immune to the virus and become anti-body fighting people in the body of the virus.

According to experts, if 60 to 70 percent of the population of Delhi suffers from corona and its anti-bodies are formed in the people, then the speed and capacity of the virus infection will start decreasing and it will end gradually.

The possibility of herd immunity in Delhi has also increased because now cases of corona are declining here. Experts have said that the peak of Corona in Delhi is gone. Statistics also testify to this. 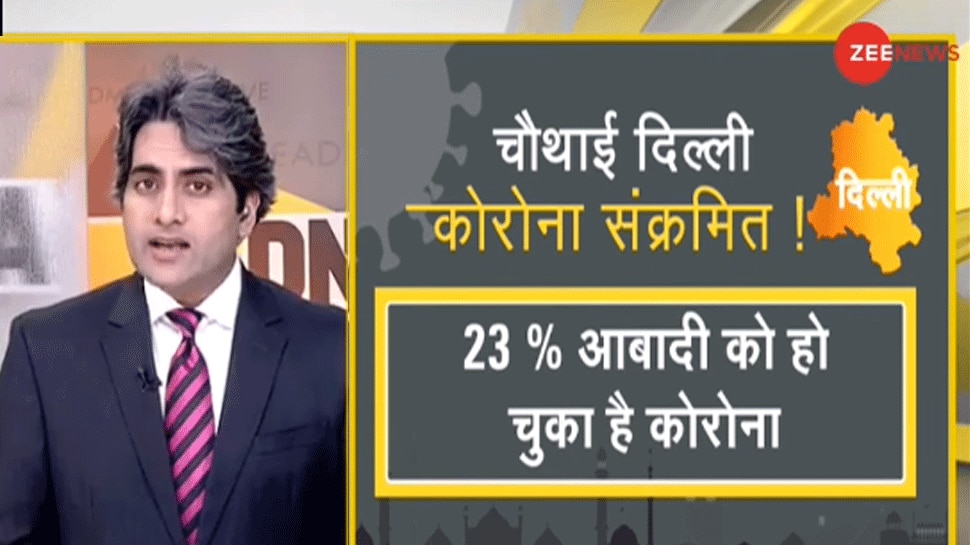 What the figures say
Delhi’s positive rate was around 32 percent in June, which has now come down to only 7 percent. Positive rate means how many people got corona positive on how many tests.

Although the total number of corona cases in Delhi has crossed 1 lakh 23 thousand, but the active cases are now only around 15 thousand and it has been recorded continuously.

In Delhi, the recovery rate of the patients recovered from Corona has also reached 84 percent, which is 63 percent in the country.

The dwindling case of the corona and the results of the sero survey has increased the expectation of Delhi to get herd immunity, but that does not mean that you should stop trying to escape the corona. Rules such as wearing masks and following social distance will still have to be followed.

Now you can understand that by considering the results of serological tests in Delhi, a large population has already been infected with this virus in the whole country. It is possible that you or some of your knowledge has also got this infection and you have not even known. So far more than one crore 44 lakh tests have been done in India and currently the positive rate is around 11 percent.

Definition of epidemic changed relationships
India will soon recover from this virus. But the question is what will happen to the problems that this virus has left behind. This epidemic has also changed the definition of relationships. Some people are unable to meet the members of their family who are infected and are hospitalized. While some people are not ready to touch their own relatives who have recently got corona virus. How an epidemic has changed all definitions of relationships in one stroke. We have prepared a small analysis on this and you should not miss it.